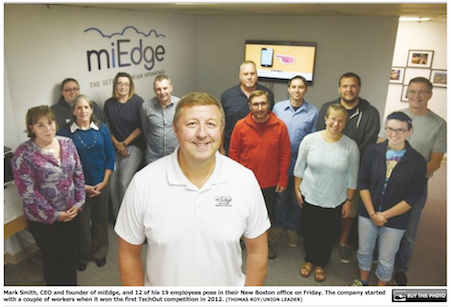 Five years ago, miEdge™ founder Mark Smith had a fledgling startup with a few employees and a vision for what it could become. Judges for the New Hampshire High Tech Council's first TechOut competition believed in that vision and awarded Smith $50,000 as the first-place winner.

That investment gave Smith some relief with his cash flow and granted him access to a network of advisers who could provide him expertise as he refined a plan to develop data gathering and analysis tools for the insurance industry.

Now, the New Boston company is generating between $4 million and $5 million in revenue, has nearly 20 employees and is primed to double its workforce within the next couple of years.

"One of the things I learned was that being an entrepreneur is extremely lonely. It's you against the world," said Smith, a long-time veteran of the insurance industry. "What TechOut did was give me almost some brothers that I could go shoulder to shoulder with for advice, support, and ideas."

The 2017 edition of TechOut offers all of that but ups the ante: This year's first-place winner will receive $200,000 in investment funds. The council has extended the application deadline to Oct. 4. (Visit nhhhtc.org or call 603-935-8951.)

Over time, miEdge has expanded its reach to the point where it's finally reaching the broad vision Smith had for the company when he it.

"When we first started out we were focused on the health and welfare industry. We basically had one specific data source from the Department of Labor, and we did lots of stuff to it," he said. "And we made it easy for insurance brokers, consultants and insurance carriers to basically mine and search that data."

Now the company gathers data from several federal sources including the IRS, the Federal Communications Commission, the Department of Transportation and the Occupational Safety and Health Administration.

"We are able to take all of these disparate data sources from different places, and using our processes and algorithms able to put it into a way that people could look at one particular employer profile and have information coming from all different places - where none of that information talks to each other at the government," Smith said.

Bedford-based investment banker and venture capitalist Matt Pierson, who has been involved with the TechOut program from the outset, "has been hugely inspirational to me as a business partner," Smith said. He also received a lot of help from Dyn founder and former CEO Jeremy Hitchcock.

"Multiple times (Hitchcock) came to my office and sat with me and gave me advice. He didn't need to do that. He wasn't an investor," Smith said. "He wasn't looking for anything. He was just looking to help me as a small business owner, and I'm forever grateful for that."

Creating those connections for startup companies is a big part of mission, Pierson said.

"Whether they won or not, I think all of them made new connections to people who could be mentors or board members or advisers or angel investors who could make investments to the company," he said. "It's really multifaceted. It's not just about the money. It's about expanding the connection you have to people who can help you as you go down this entrepreneurial path."

It's not just about the money, but there's a heck of a lot more money for the sixth edition of the contest. The investment award funding for the event has been tripled, thanks to the Millworks II Fund - a partnership among a group of New Hampshire investors - and the New Hampshire Business Finance Authority.

"It's a really a game-changer," Pierson said. "When we were offering a $50,000 prize, the way I would look at it is maybe that would buy you one software developer who's working for a lot of equity. It's not even a salary for a junior level software person.

"When you're talking $200,000, that's a whole other story. You can bring on board a couple of qualified people, might have a little money left over for marketing, maybe for some rent expense. You can fund your customer acquisition costs, which a lot of startups is your biggest expense."

While the stakes are higher this year, the goal remains the same: Find some promising startups and help prime them for success.

"In the case of miEdge, it's really a great example in that it was a company not quite ready from a documentation and legal organization to actually raise money," Pierson said. "But going through the TechOut process, not only did we give them some capital they needed to get off the ground, we helped them get to a position where they could raise additional capital and really structure the business for future growth."

Contact Business Editor Mike Cote at 206-7724 or This email address is being protected from spambots. You need JavaScript enabled to view it.